ZAKA, for over 30 years has served as a rescue and recovery volunteer organization, with thousands of volunteers on call 24/7 to respond to any terror attack, accident or disaster.

ZAKA Search and Rescue is a UN-recognized humanitarian volunteer organization that provides a rapid response to mass casualty disasters across the world. To date, ZAKA has saved thousands of lives—and honored those who couldn’t be saved with dignity in death.

We are ready for whatever tomorrow brings.

1. Rapid rescue response to mass casualty incidents—to save men, women, and children from the brink of death.

2. Crisis training for local volunteers—to empower every community to mobilize their own resources—and save lives—in the first critical few days until international emergency forces arrive. 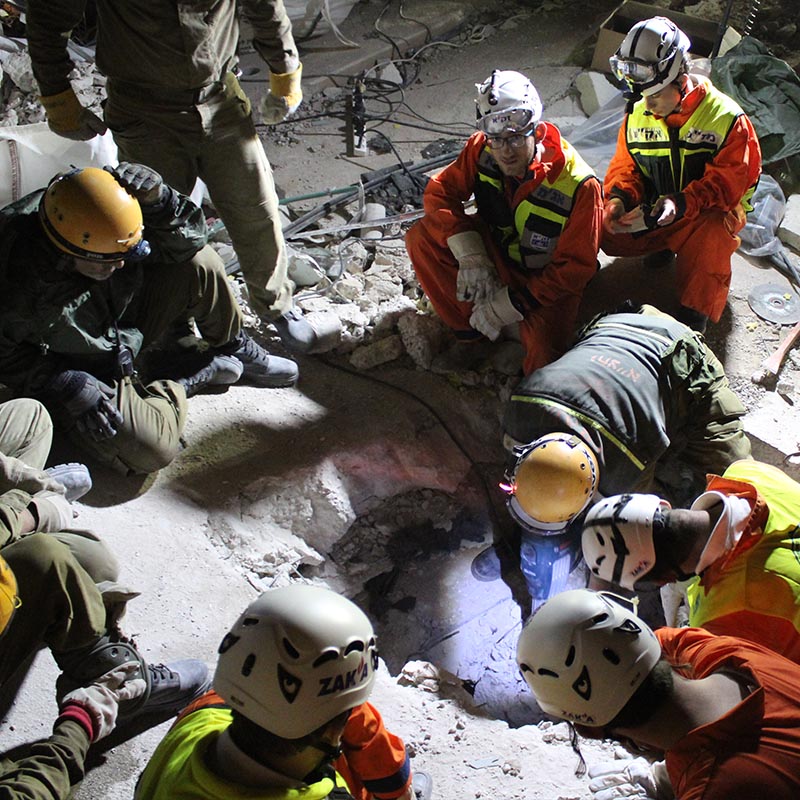 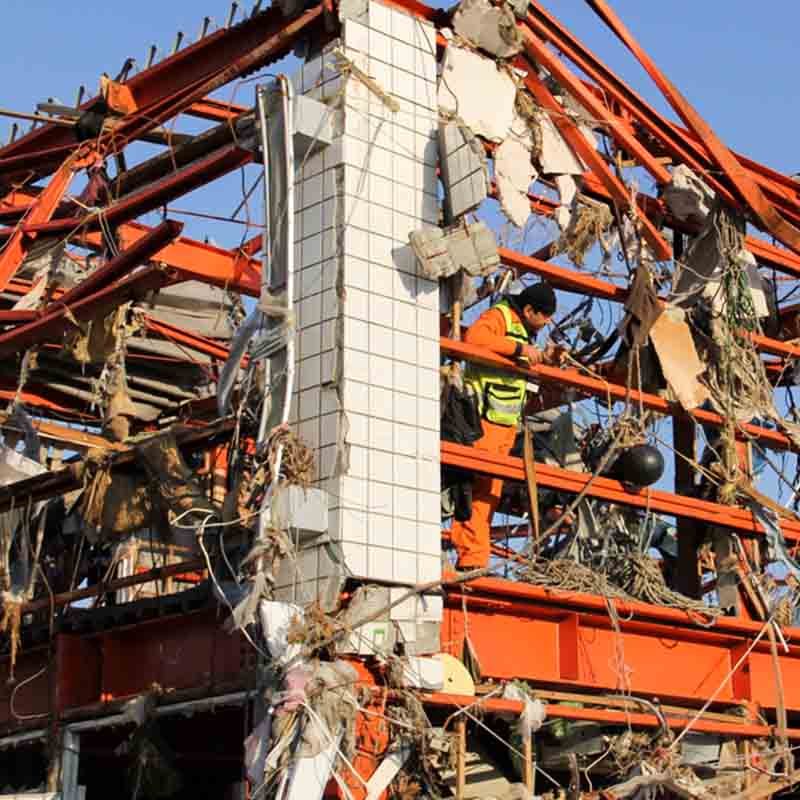 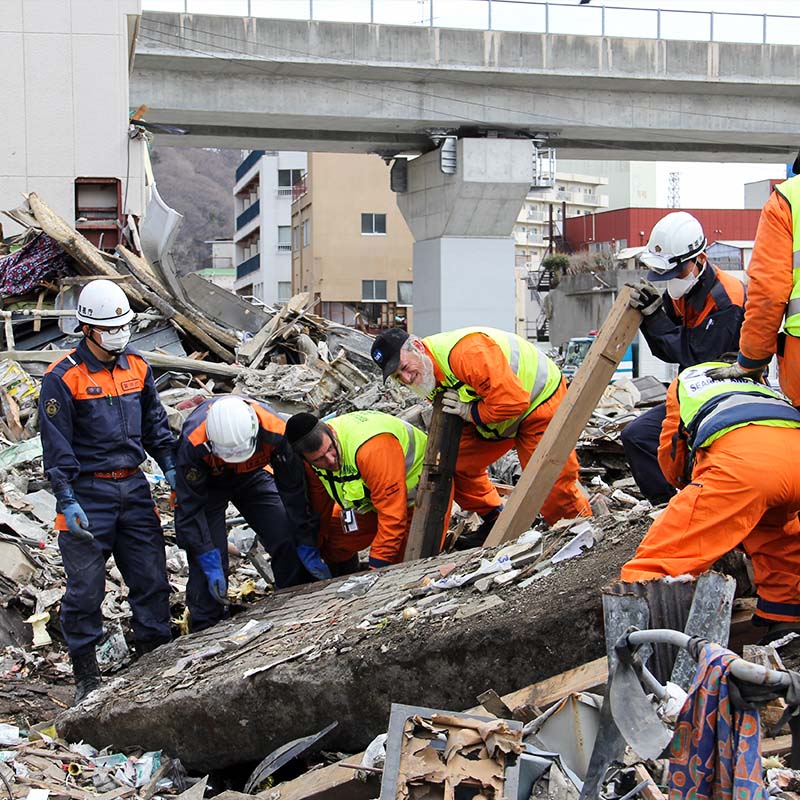 ZAKA has earned the support and recognition of the United Nations.

Founded in 1995 by Yehuda Meshi-Zahav, ZAKA is a dominant non-governmental rescue and recovery organization, with over 3,000 volunteers deployed around the country, on call 24/7 to respond to any terror attack, disaster or accident immediately, professionally and with the necessary equipment. 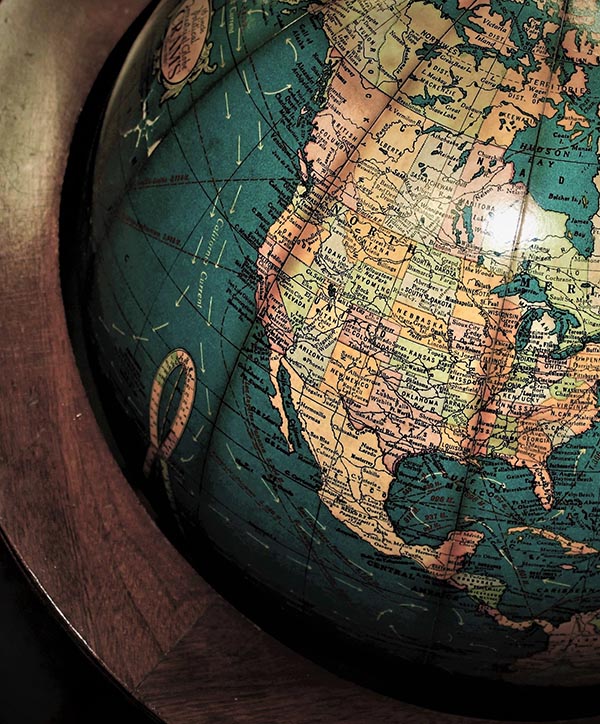 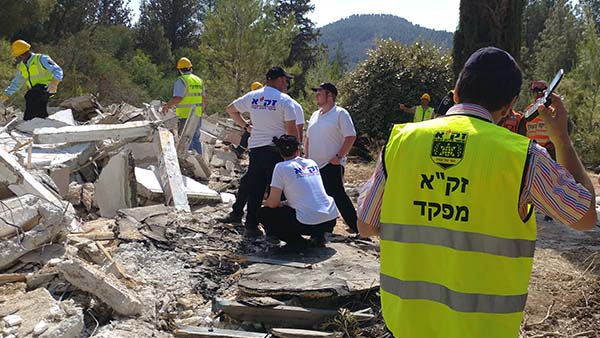 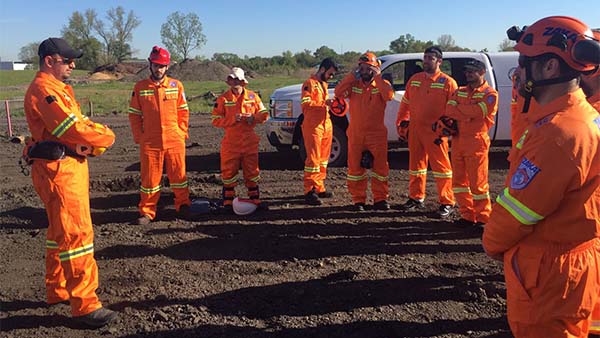 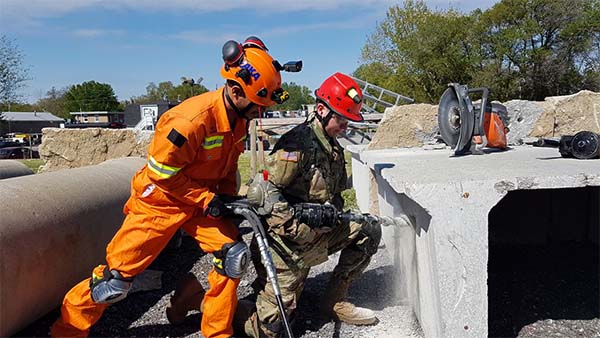 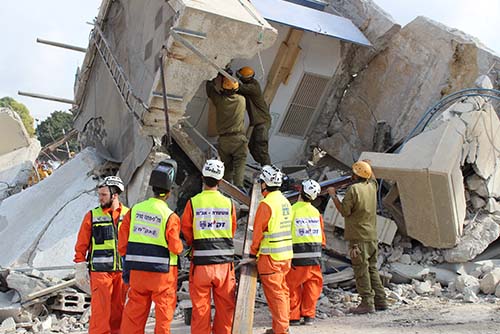 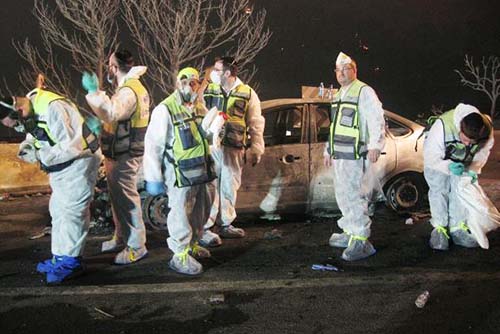 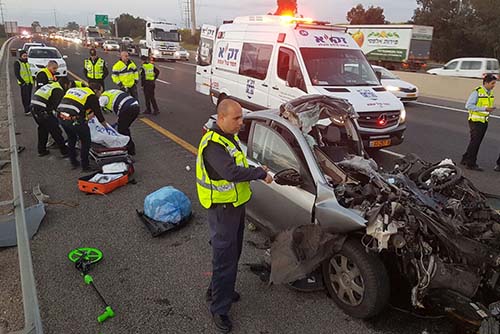 ZAKA Jeep Unit with specially-equipped ATVs offering access and speed in difficult terrain for search and rescue missions, including a Firefighting ATV unit.

ZAKA Rapid Rescue Motorcycle Unit with tens of motorcycles equipped with life-saving medical supplies, ridden by paramedic volunteers. Many lives are saved thanks to their swift
response

ZAKA Divers Unit and ZAKA Sapir Jet Ski Unit dealing with hundreds of search and rescue incidents a year at sea, in rivers and lakes, manned by specially-trained divers, many ex-Navy.

ZAKA Emergency Unit, with thousands of volunteers from the general public who can be called upon during an emergency such as war or earthquake to offer assistance to the civilian population, especially in the first few days.

ZAKA Climbing and Rappelling Unit with specially-trained search and rescue volunteers able
to reach areas that are not readily accessible.

ZAKA AROUND THE WORLD

“The stench of thousands of bodies is everywhere”

ZAKA’s delegation was one the first search and rescue team to arrive in Haiti: they disembarked just 24 hours after the earthquake. After assessing the situation with the local emergency forces, the team immediately set to work.

The team described their “Shabbat from hell” in a disturbing email that says it all: “The stench of thousands of bodies is everywhere. You have to understand that the situation is true madness. With every passing minute, there are more and more bodies, in numbers that cannot be grasped. It is beyond comprehension.” 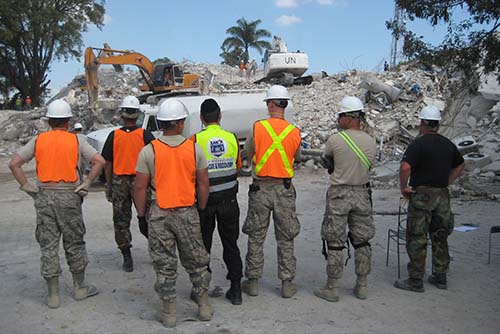 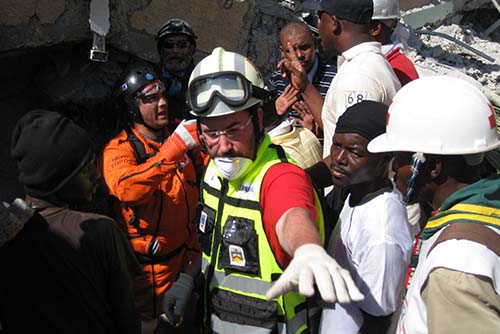 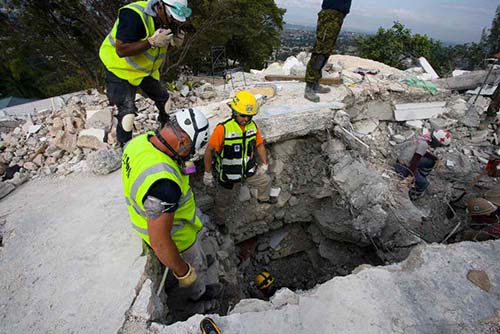 Haiti was a turning point in search and rescue missions: the global community realized that relying on international emergency forces in a time of disaster was not enough.

In response, ZAKA developed a light search and rescue training course—the first of its kind— to enable locals to help themselves before the arrival of international emergency forces. This prescient setup helps save many more lives, and is much more cost-effective for governments. 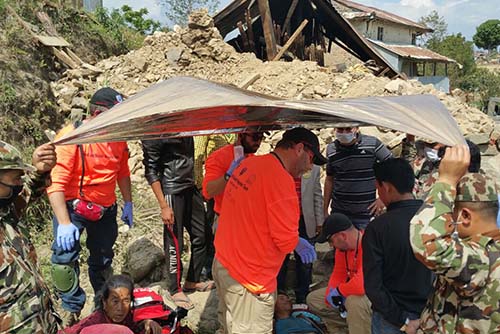 ZAKA volunteers responded to the Nepal earthquake and brought specialized knowledge and expertise to the remote areas.

ZAKA set up some of the first mobile emergency medical clinics in remote, difficult-to-reach locations. Carrying much-needed medical supplies, emergency rescue and recovery equipment
and humanitarian aid, the ZAKA paramedic volunteers drove through previously impassable roads to reach mountain villages, where residents thought they had been abandoned to a cruel
fate.

Among others, the ZAKA team rescued stranded travellers taking shelter in a remote monastery and ensured their safe return home. Tragically, after a long and complex operation in difficult
terrain, the ZAKA volunteers, together with family members and friends, succeeded in locating and recovering the body of a missing hiker.

“A shimmer of hope ”

The ZAKA Guatemala unit was established in February 2018, when 45 volunteers from the local Jewish community and representatives from the local emergency services underwent intensive ZAKA search and rescue training. It was just four months later that they put that training to the test, when the Fuego volcano devastated the area.

ZAKA volunteers were on the scene immediately, helping to save lives, rescue trapped survivors and recover victims – even before the international airport re-opened and emergency forces arrived from overseas. Thanks to the timely ZAKA training, hundreds of lives were saved and the community was empowered to manage the crisis for itself, while working in close cooperation with the emergency forces.

In August 2018, the ZAKA volunteers helped raise money and construct a new 100-home neighborhood for volcano survivors, which was called Jerusalem in recognition of the ZAKA team contribution to the community in times of crisis. 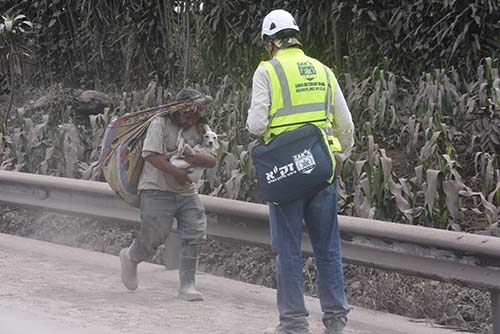 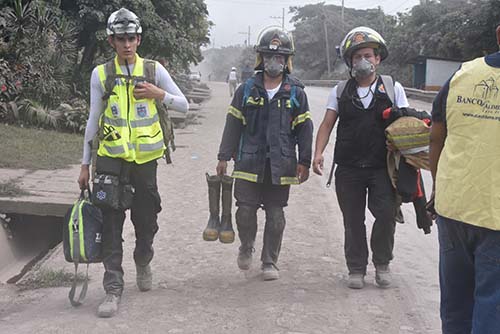 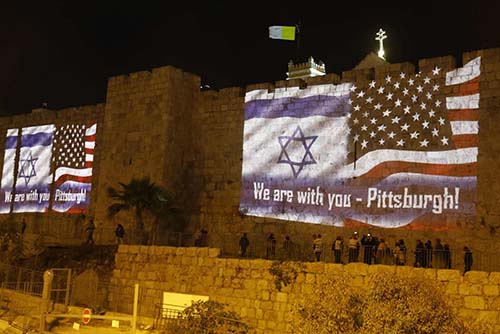 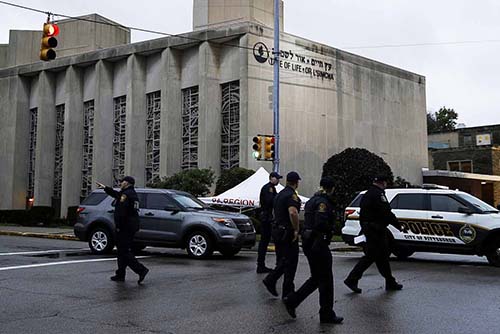 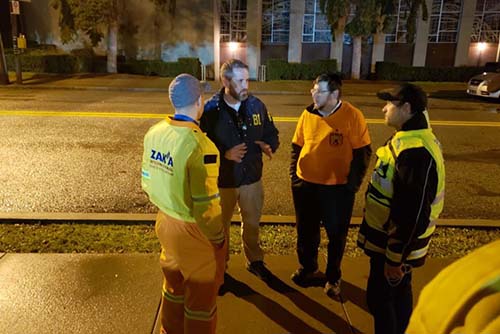 “An act of pure evil”

ZAKA Search and Rescue Commander in Pittsburgh Rabbi Elisar Admon remained at the scene of America’s deadliest anti-Semitic attack throughout the night. With patience and sensitivity, he briefed the FBI and emergency forces on Jewish burial laws, explaining the many issues that relate to honoring the dead despite the confines of an FBI crime scene.

Thanks to the close cooperation between ZAKA and the FBI, Admon was allowed to enter the site together with the local rabbi to make initial preparations and identifications and ensure the removal of the bodies for burial in accordance with Jewish law. Such was the level of cooperation and religious sensitivity displayed by the FBI as a result of the mutual confidence and trust that Rabbi Admon and his team of ZAKA volunteers were allowed to access the site on a room by room basis to clean the area of all bodily remains and spilled blood for burial.

In today’s world, where natural and manmade disasters often overwhelm local emergency forces by their inordinate scope, communities deserve to receive the right training and tools
necessary to save lives. The importance of local teams rescuing survivors in their own region is essential, and this is precisely the solution that ZAKA Search and Rescue offers to communities throughout the United States and around the globe.

Emergency forces are essential—but no one can save lives like the locals.

This was the lesson learned from the Haiti 2010 earthquake, when it became clear that it was the locals who’d succeeded in saving the most lives in those critical first days.

And this is why ZAKA developed its 5-day Light Search and Rescue training course.

In today’s world, where massive disasters—natural and manmade—often overwhelm local emergency forces, communities deserve to be empowered. They deserve to get the training and tools they need to rescue survivors until emergency forces arrive. This is why ZAKA offers a 5-day Light Search and Rescue Training to communities across the globe.

The training, which was recognized in 2016 by INSARAG, includes: 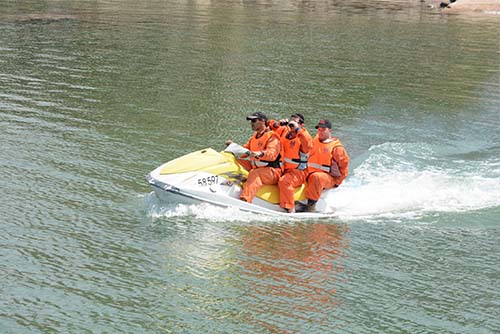 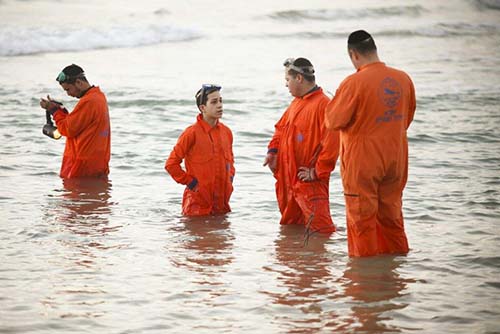 Is the program effective?

Yes—and it was proven in Guatemala in 2018. Thanks to a ZAKA community training that took place just 45 days before a devastating volcano eruption, thousands of lives were saved and dozens of victims were recovered—days before the arrival of international help.

Setting up a team 30 volunteers

What World Leaders Are Saying About ZAKA

ZAKA’s commitment to treating all the victims, regardless of religion, race or ethnicity, sends a powerful message. The United Nations is pleased to have ZAKA as a partner in our humanitarian operations and in our wider efforts to reduce disaster risk and improve disaster preparedness. 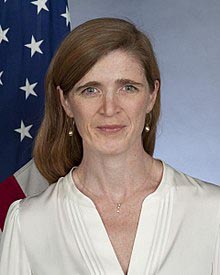 ZAKA Chairman Meshi-Zahav told me that ‘We save anyone who needs to be saved, and honor all people equally’. I can think of few more profound ways to define the mission not only of humanitarians, but of anyone who believes in the principles of equality, human rights, and dignity, that the UN was created to uphold.

US Ambassador to the UN 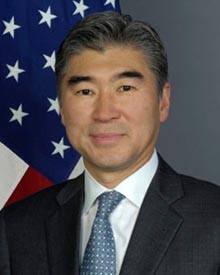 We thank ZAKA for their unique and swift assistance to our civilians who were injured in the
typhoon disaster. Without a doubt, your activity saved many lives. 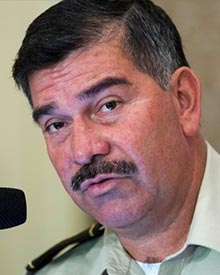 I congratulate the ZAKA delegation members on their work after the volcano eruption.
Guatemala greatly appreciates this blessed initiative. 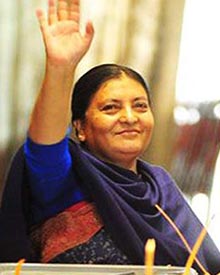 The Government of Nepal is grateful to your team for traveling to Nepal and your efforts to help us in our time of need. 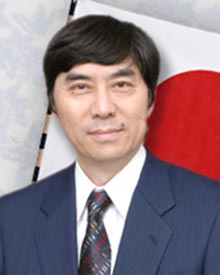 Your work in the devastated areas after the tsunami and earthquake and your specialist knowledge and assistance was much appreciated by the emergency services with whom you worked in the field. We in the Japanese Embassy have great esteem for the humanitarian endeavors of the ZAKA organization. 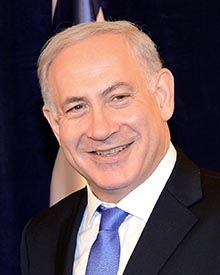 I would like to thank you all for the important work that you are doing and to encourage you to continue. You work to rescue people buried in the ruins, people who needed an outstretched arm, and that hand was yours.“

With Your Help We Can Save More Lives

ZAKA, for over 30 years has served as a rescue and recovery volunteer organization, with thousands of volunteers on call 24/7 to respond to any terror attack, accident or disaster.